Edited by Vivian Kelly
As a nearly 20 year Fashion Industry Vet, I've made TheFE my place to cover and discuss everything fashionable from books, to designer ready-to-wear to couture. All aspects of a fashionable lifestyle are included. BIG NEWS: I'VE MOVED TheFE TO WORDPRESS to take advantage of their superior publishing platform. http://thefashionexaminer.wordpress.com See you there!!

Everyone - thanks for your support the past few seasons.
Good news - TheFE has moved to WORDPRESS, as the publishing platform is WAY better.

Please update your bookmark for The Fashion Examiner.

Vivian
Posted by Edited by Vivian Kelly at 11:42 AM No comments:

Email ThisBlogThis!Share to TwitterShare to FacebookShare to Pinterest
Labels: the fashion examiner

Posted by Edited by Vivian Kelly at 5:21 PM No comments:

I'm in the midst of moving over to WordPress.
Today's post on what I'd like to see at today's Oscars, www.thefashionexaminer.wordpress.com

See you there!
Posted by Edited by Vivian Kelly at 7:12 PM 1 comment: 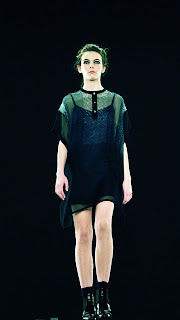 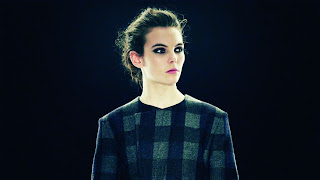 Hair and makeup play an important part in the overall look of a collection, as do the right accessories. With that in mind, I invited my friend, hair and makeup artist, Cassi Hurd to join me backstage to see Woolrich John Rich & Bros. ‘ launch of Black Label by Paula Gerbase.
In a somewhat comical blooper, [sorry – I deleted it from the video!] I asked Paula “where was the lingerie aspect” to her collection?” I’d hurriedly researched Paula that morning and came up with “British lingerie designer.” I couldn’t imagine how lingerie would play into a Woolrich Collection.
It does not.
It was no surprise that Paula seemed initially a bit taken aback before laughing and telling us, that her background is in Savile Row.
Aha. That explained the beautiful tailoring of the pieces the models posed in on the podiums outside in the shadowy Eyebeam Studio.
Until I got to Eyebeam Studio and met Paula, I’d thought of Woolrich as “in the country” plaid, red and black buffalo check, specifically.
Paula switched things up and delivered forest green and navy plaid – much more sophisticated. Green, one of the colors of the season, looked good. One of my favorite pieces was a  semi-sheer wool overdress.
Paula describes the Woorich Black Woman as a female urban warrior-ess. She’s not slopping around in Lakeville or Kent Connecticut in her Muck Boots and red buffalo coat.  Classic Woolrich will do just fine for those “in the country” weekends, but that is not what Black Label is about.
The Woolrich Black Label collection has a more sophisticated sensibility. Woolrich Black is for women who are concerned with braving the cold and wet streets of Gotham and the Windy City, London, Paris, or Milano in cozy layers on their way to work at their cool job at the Museum, Ad Agency, or Art Gallery.
The Black Label woman’s hair and makeup has that “done but not done” look that women from the above cities do so well. Paula told us that she chose to have the models’ hair up or down, depending on the neckline and proportion of the outfit she was wearing.  This is a refreshing departure from the formulaic [and dated] concept of having all the models hit the catwalk in precisely the same hairstyle, which reminds me too much of Gianni Versace and Calvin Klein shows in the early Nineties.

For the fun of it, I mentally gifted myself the navy and green tartan jacket and picked some accessories to wear with it. My vision – attending Paris Fashion Week this coming fall, in the jacket, Tom Ford  “Peter” or “Raquel” sunglasses and tuning out the noise around me with a matching pair of WeSc checked Bongo headphones in moss green.

These are just my suggestions on what to wear with these pieces. What would YOU accessorize them with? I'd like to know!
For more tips on how to work your hair and makeup, visit Cassi’s site, www.youniquechic.net
Where To Buy:
Woolrich Black Label will be available at Barney’s NY this fall.
All accessories mentioned, available at www.tobi.com
Posted by Edited by Vivian Kelly at 7:07 PM No comments:

The Duckie Brown fall 2011 Show: Ruminating Backstage With the Duckies

"Is this a 'men's collection" or a "women's collection?"
UGH.
Like Steven Cox, 1/2 of the Duckie Brown label, I find the question rather, well... dated. Perhaps a better word would be, "anachronistic"".
Back in the early Eighties, we had Grace Jones and Brigitte Nielsen. They looked FAN-TAS-TIC. They made the point that you could be masculine AND feminine - all at once. Both sported looks such as white "wife beaters" and "men's" black tuxes in now-iconic photographs. They helped spout the notion of "androgyny" which photographic legend, Helmut Newton, helped to make fashionable.
Another famous example is Bianca Jagger, back in her Studio 54 Days. Her most famous outfit was a white PANTsuit. In the Seventies though, it was considered "daring" to wear pants to work. 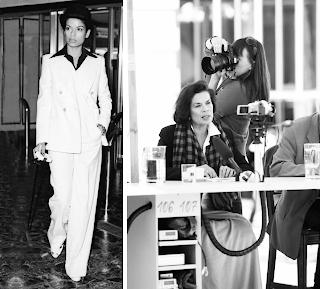 Then-Vogue Editor, Grace Mirabella, was considered to be "daring" to propose this as "a work option". As I later learned, as one of her Assistants, in the early Nineties, Miss Mirabella meant what she said. I cannot recall a SINGLe day she did not walk into the office in slacks. Her favorites were: Geoffrey Beene, Calvin, and Bill Blass, not necessarily in that order. 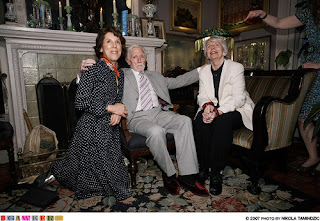 Even in the mid-Eighties, when I was going on my first job interviews, I wore SKIRTS - no question. Pants, were not really an option.
The whole topic seems ridiculous in retrospect. Just a year earlier, I'd gone on a road-trip to UVA [The University of Virginia] for a weekend of party hopping. The scene I lived out that weekend was straight out of Tommy Hilfigger's tailgate glossy ads. What's interesting is that when you inspect it closely, "preppy style" can ALSO, like "East Village Punk", look quite uni-sexual. We college co-eds were from a dozen or so different colleges and universities but we all looked like the frat boys whose parties we attended.
The uniform: Lacoste shirt [untucked], Levi jeans [unwashed and stiff] and Sperry Top or Docksiders. Sounds limiting? Not really, when you consider how many different colors the Gator shirt was available in.
Okay, I made-up that word, "unisexual". At the end of the day though, most of us are looking for clothes that we, as people, can just wear.
SOME "PEOPLE'S FAVORITES"
-The "wife beater tank
-Converse "Chuck Taylors"
-A really WELL CUT pair of trousers - Duckie Brown! Oftentimes, they will be black.
- Levi's original 501's. You need to break them in, it just takes time. Be patient.
-A Woolrich red and black buffalo plaid jacket
-Docksiders, the originals. 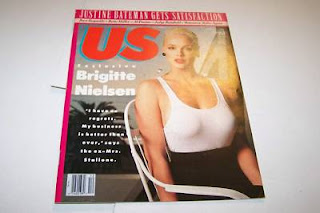 So, why can’t a man wear women’s clothes and vice-versa? Duckie designers Steven Cox and Daniel Silver ponder the question in our pre-show interview, here.

Posted by Edited by Vivian Kelly at 9:01 PM No comments: 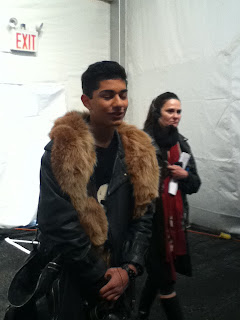 Mark Indelicato aka “Justin Suarez” of Ugly Betty was backstage at Duckie Brown, gamely posing for the photogs and video crews who pounced on him once they realized who the slight extravagantly dressed boy was.
Mr. Indelicato is a perfect example of someone [man or woman – does it even matter?] who “does his own thing”. He looked great, but what he was wearing would have looked just as good on a woman, the right woman, one who is secure in her own style.
This is pretty much the point. Why can’t a man wear women’s clothes and vice-versa? Duckie designers Steven Cox and Daniel Silver ponder the question in our pre-show interview, which will run next week.
In the meantime, here’s a short clip of Mark Indelicato talking about his personal style and his thoughts on Duckie Brown.

Posted by Edited by Vivian Kelly at 9:47 AM No comments:

TEXT, Vivian Kelly
Interview with Menswear Editor, Mark Behnke of www.fashiontribes.com
When it comes to mens’ fashion, Fashion has always suffered with being labeled “elitist”, “not for the regular guy” or “too edgy”, and even “scary”.
Normally, during NYFW, I’m drawn to just such “directional” collections such as Duckie Brown’s [a big favorite], Andrew Buckler, and Siki Im. 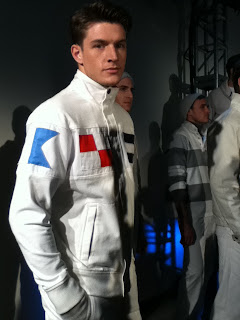 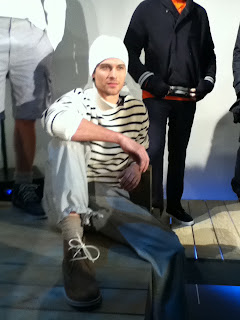 This season, though, I decided it was time to be more “democratic” and see just what bigger consumer brands such as Nautica were proposing men wear in 2011.
As I walked the crowded show space with Mark at the Lincoln Center Library, I was reminded of a long-ago Christmas in the early nineties.
I’d just returned from Neiman Marcus and with a pair of Gucci horse bit loafers for my conservatively minded first husband.  While in the thrill of the luxe buy, I’d reasoned to myself that they were “traditional” and that he’d approve.
I Was Wrong. Sad, but not really understanding WHY he wasn’t thrilled to receive them, I returned them on Boxing Day.
His explanation: He loved his Top Siders, always would and did not want to be “fashionable”.
My EX is one of legions of affluent guys who “want to look nice” but are not interested in clothes that would make them “stick-out” on the golf range, on a sail, sporting events, or Friday night poker night with the boys.
Nautica is a great choice for men of this ilk.
#1: It's no hassle- just go to Macy’s and you’re out in less than 20 minutes and back pursuing your leisure time activities.
#2L  Fit – nothing skintight here that requires you to be a gym rat in order to fit into the more avant-garde brands. Asparagus silhouette not required.
3.     #3: Traditional designs and themes. As Mark points out in our video, there’s a nautical theme that appeals to the traditional guy, and “safe” neutral colors.


None of the above is true if you happen to be a liberated metro-sexual type such as  Mark, whose morning grooming lotions and potions rival the most “high-maintenance” woman’s. And that’s great! It’s probably “Queer Eye for the Straight Guy” that’s responsible for “regular guys” to start thinking in a more “directional” fashion and to consider fashion lines such as Duckie Brown, Buckler and Siki Im.
*The pre-show interview with the Duckies goes live here next week! 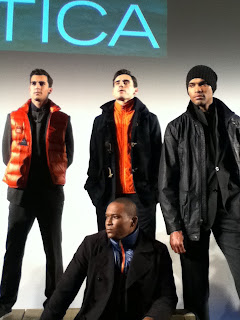 Posted by Edited by Vivian Kelly at 3:51 AM No comments: